This Image Was In My Dreams Last Night...

Have you ever had something so vivid in a dream that it seemed real? I'm not sure what triggered this image in my head during sleep, but it was there...

The postcard, from blogger tut tut tut, is entitled The Tightrope Wedding and was made and published in France. It is not only visually  interesting, but rife with symbolism as well, I think.

Tut tut writes, "Postcards are hard to find these days, aren't they?"

She may be right, especially when it comes to images as intriguing as what is depicted here. 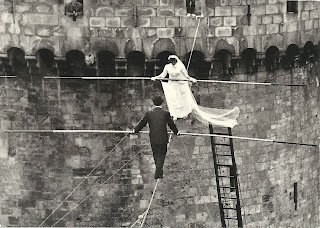 Karen, who blogs at Bordertown Notes, sent me this wonderful postcard of elephants at sunset. Karen lives in Botswana and sees all sorts of beautiful animals, birds and plant life. Though I meant to post this long ago, doing so now has enabled me to try out the scanning function on the new printer. 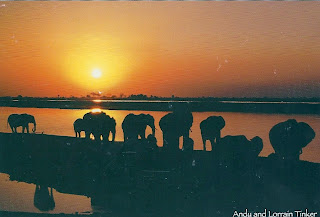 Elephants are a favourite of mine. My fascination started with Babar and has never abated. According to the back of the card, a healthy elephant can produce ten calves in her lifetime and can give birth every four years if conditions are good.  Karen writes, "We see herds of elephants almost every day, crossing the roads en route either to or from the river. Watching them is a wonderful distraction from our chaotic world."

I could not agree more. Additionally, though I have become accustomed to the immediacy of e-mail, there is something special about receiving postcards and letters as well as sending them that the modern world seems on the verge of loosing...

Email ThisBlogThis!Share to TwitterShare to FacebookShare to Pinterest
Labels: Postcards;

It was almost five and I was just out the door of a neighbourhood market when the sky exploded. It has been raining buckets here ever since, with the occasional roll of thunder thrown in for good measure. This is supposed to last through the weekend and will literally put a damper on some plans made earlier in the week with a friend, although a bit of water is hardly likely to stop us having an enjoyable evening.

This weather keeps me indoors more often than not, giving my wandering mind a workout. I've started to feel that my posts have gone a little stale, and although it is my intent to learn how to do photos on this iMac, the issue is that my cheap digital camera hasn't held up under regular use over the last three years and that having spent a packet on the iMac, a new camera simply isn't in the cards for the moment.

That said, this blog is likely to be more print-intensive for the foreseeable future, so those of you who like photos have my apologies. I will remedy the situation as I can. My last experience taking the camera around town  resulted in someone attempting to snatch it. Though they were foiled in the effort, I was left shaken. No blog is worth that. Happily, I can still say I have never been robbed.

Email ThisBlogThis!Share to TwitterShare to FacebookShare to Pinterest
Labels: life in its hilarity

Have any of you ever watched a stock plummet while others were holding their own or going up in value and wondered what was going on within the falling company's ranks?

Netflix, a favourite company of mine for the last seven years, has, I believe, shot itself in the foot, not once, but twice. The stock, which had soared to three hundred dollars per share in July, fell upon announcement of a sixty percent rise in the cost of subscriptions. Those of us with the unlimited higher end plans did not see as high an increase as did folks paying $7.99 per month.

Unfortunately, a sixty percent hike in any cost these days is likely to be met with extreme rancor, something Netflix CEO Reed Hastings and his team should have been able to predict. While he has since apologised for the way the announcement was handled, the change in pricing structure remains as company  stock continues to fall.  Additionally, however, while apologising to customers, Hastings also stated  that the streaming of films and home shipment of DVD's are soon to be divided into separate entities, each with its own website, billing and customer service teams. What was once convenient and seamless for customers who enjoyed both services, is soon to become yet another bill and service requiring time and attention.

When one examines the situation, it is apparent that Hastings sees the market for mailing DVD's eventually shrinking in favour of streaming content. At present, Netflix supply of DVD's outstrips its available content for streaming. A look in stores, libraries and websites such as Amazon would indicate that while streaming is the next frontier in online entertainment, DVD sales and availability are like to remain viable for some time.

People continue to tighten their belts in response to rising expenses, lacklustre employment and competition for their entertainment dollars, making me wonder at yet another case of poor timing on the part of a company whose services I and many others once enjoyed.

The markets were up today. Despite this, Netflix stock continues to take a thrashing. I sold the few shares I had at 143 this morning. As of this writing, the stock is at 130...

Email ThisBlogThis!Share to TwitterShare to FacebookShare to Pinterest
Labels: Film;

I was almost finished deleting and condensing files when I came across these photos of my maternal grandfather. He was the adventurous type, taking a job three thousand miles outside his home country in a part of the world he had never before set eyes on. He and my grandmother raised three children and were there for almost all of their working lives. I came along during their mid-lives when they still had teens underfoot. The photo below was taken later, about 1961-62, when "cat" specs were all the rage. 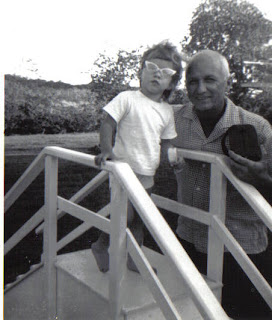 Email ThisBlogThis!Share to TwitterShare to FacebookShare to Pinterest
Labels: boats; life on the water; meditative scene;

I was able to go to Best Buy today. Initially, I intended only to speak with a sales associate regarding Macs and HP's. When all was said and done, however, I found a new iMac for the same price as the re-furbished Mac I had seen online from the Apple store. For better or worse, the deal is done. I will go with a friend on Friday to pick it up. I am looking forward to the wonderful resolution on the 27-inch screen.

My thanks to those of you who have made recommendations, wished me luck in my search, and listened to my pros and cons. I am especially grateful to Barbara from http://looking2live.blogspot.com for putting me in touch with her husband. He is both an Apple devotee and extremely computer literate.

There may be a bit of re-learning involved in this migration for me; I am looking forward to that.

Email ThisBlogThis!Share to TwitterShare to FacebookShare to Pinterest
Labels: Technology;

My optimal drive on this Dell is probably dead, so says the computer repair person. As far as he's concerned, I should just purchase another desktop and leave the matter done and dusted. No-one will actually come and examine this technological dinosaur, but everyone has an opinion.

I spoke at length with an Apple representative online whose best suggestion was a refurbished iMac for $1700 or so. That is a good price in Mac land. She diligently answered every question I had and then some, an experience which left my brain gyrating in fourteen directions at once...

Then, there was the abbreviated chat with the woman from a well known computer store in my immediate vicinity. I asked what size monitors were available for the HP desktop being scrutinized, and she typed "any."
The specificity boggles...

Dell trumps these by sending tech support  jobs overseas. It was difficult making myself understood and when the "refurbished" speakers arrived to take the place of the cheap versions used with their machine, all the Dell representative could tell me when neither worked was and I am speaking English here, "throw them out." I went to a neighbourhood computer supply for replacements from another company that still function.

Of course, I am the type who loves to see, pick up and examine everything before purchase. This makes online shopping an exercise in aggravation. The reps will tempt with, "This deal is for today only, so grab it while you can!"

Something in this approach reminds me of used car lots and the salespeople that lurk there looking for custom...The only thing I want to grab after hearing those words is the nearest exit.

Email ThisBlogThis!Share to TwitterShare to FacebookShare to Pinterest
Labels: Computers

On Sunday, my neighbours and I headed south. Our trip ended in the town in which my mother was born and where large chunks of the families of  her parents lived. I was able to see two great-aunts, both in their nineties, and a cousin, each of whom I enjoy. After an overnight in a quaint hotel, we awoke to gray skies and rain, so my plan to visit the beach a stone's throw from my room did not pan out.

The lovely dinner and conversation of the night before was worth the travel and the sheets of rain which hampered visibility on the way home. Never a fan of interstate driving, I was amazed at how deftly the younger of the two neighbours negotiated the roadway. I'm sure it was a bit hair-raising for him.

This "mini-holiday" is it for the summer and possibly the remainder of the year. Time or money constrain all things, unfortunately. Below is a favourite beach photo. 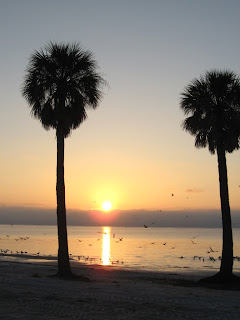