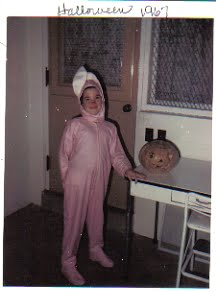 This was one of my favorite costumes as a kid. Sewn from old curtains by my mother, it had both floppy ears and a tail. The only drawback was the long sleeves which were far too hot for our tropical climate. The pumpkin was a first attempt at carving for either of us and while my mother was a lovely cook, I've never been a fan of pumpkin pie...

Have You Ever Found Yourself With A Clueless Friend?

She of "who is the man in this situation?" has struck again...

Calling me on Saturday to ask me to have what she suggested was a quick dinner because she would need a break from lesson plans on Sunday evening, I agreed, telling her that 5 PM was a good time to come by since I had prior plans with another friend.

What happened next was everything but a nice, low-key dinner. My friend rings me while I am busy and leaves a message that she will be at my place shortly after four and that we are going to meet a friend of hers, whom I don't know, at that person's house. This individual will not go to dinner with us.

After scurrying around and leaving she of the dinner invite waiting on my stoop, we go for a short drive, arriving at a small ground floor apartment littered with shoes, papers and other possessions and crammed with large furniture. A bit of conversation later, it becomes apparent that my friend and this woman planned this encounter. What is also obvious after further conversation is that the woman is grieving and further, that she has no sense of personal boundary when it comes to her history and information. The friend who brought us there also has this problem and repeatedly attempted to induce me to talk more despite my growing discomfort.

When I attempted to gently ask the occupant of the apartment whether she had considered working with someone such as a grief counselor or therapist, she responded by telling me she was one which I'd have never known because she substitutes as a teacher in middle school.

After offering beer or water and going on for a bit about how she loves her beer, we then got an earful about her past relationships and losing her house. I must say that though I feel sorry for this person, red flags were popping up in my brain left and right. She is over sixty, obviously in distress and in need of help she won't seek for herself. Unlike the friend who introduced us, I have no plans to befriend this woman and after almost two hours of listening to her tales of woe and being solicited for opinions I'd rather not express and feeling like she should not press a stranger for ideas about personal situations, I mentioned that we should be getting on to dinner. This was met with,"Oh, do you want to order in?"

At that point, I knew that all previous plans for a quiet dinner with my friend were off as she immediately launched into what gluten free alternatives were available. When I mentioned the need for a bathroom, things really got dicey and I found there wasn't even enough room to round the corner to get to the door of the bathroom, let alone inside to the toilet. Chagrined, the lady, who is small, offered to move the floor to ceiling armoire that blocked the corner. When I said I'd prefer she did not risk straining her back, my friend piped up with,"Do you need to go now?" The temptation to say something rather snarky like, "No, I'll wait another two hours while you two finish droning on," was eclipsed by nature's call, so I let it drop in favor of a swift exit to the car, and a cool breeze, something absent from the apartment.

Arriving at the neighborhood Target, I was pleased to find a clean, unoccupied accessible bathroom. Unfortunately, however, my departure was marred by a small accident involving an elderly man on an electric shopping scooter who ran into my foot as he was backing up from trying to fit the thing in the too-small doorway of the men's room across from the women's loo I was attempting to leave. I met my friend in the front of the store and asked to be taken home where I found some comfort in an ice pack and a bowl of soup, alone.

Amazingly, after calling on Monday and asking after my foot as well as instructing me to send her an e-mail so as not to awaken her since she had to be up early for work, Clueless is quiet. Her son, who uses a wheelchair, would probably understand at least a portion of my frustration and my concerns. Some of you suggested the last time I wrote about an adventure with this woman that the only thing I should say is goodbye. You may be right. I'm opting for the don't call and don't e-mail approach. Perhaps, since she often misses the point when I bring up things that she doesn't like, she won't notice.

The pictures from my latest post include the Garden/Memorial area of the Unitarian Universalist congregation in Winston-Salem where ashes can be scattered. The two headstones are actually names of those who have been scattered there. The trees were just beginning to change color and it was jacket weather. Sunday found us at services followed by lunch at Waldo's Wings. Known for its wings, my friend and I decided to instead try the burger on special. It ended up being the largest thing I'd ever consumed in a bun. Neither of us ate again until the next morning. Sunday and Monday were both clear and beautiful and our trip back to the land of humidity was uneventful.

I have been reading, writing and trying to get outside and enjoy what passes for Fall here. I hope everyone can enjoy this season.
Posted by e at 12:34 PM 5 comments: 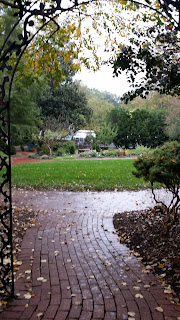 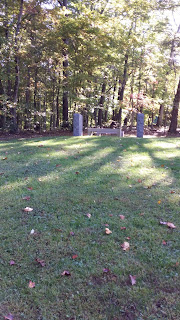 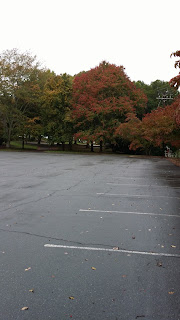 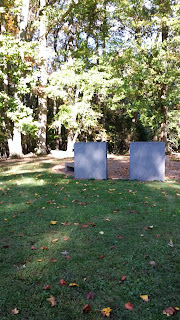 It has been an interesting few weeks around here. A friend's elderly Dad passed away at 92 and though I was supposed to attend his funeral, a slight fever kept me home. As I was planning to go out of town, I was happy that nothing more serious transpired.

The trip away was to Winston-Salem, in the northernmost corner of North Carolina, about an hour from the Virginia border. Another friend's Dad lives there and she visits every couple of months as he is also quite elderly. Our road trip began at two AM and we drove through four states, reaching our destination in early evening. I applaud the Comfort Inn and Suites for a lovely room, accessible bathroom and great bed. Not only was it comfortable, I was spared having to pirouette into a bed that was taller than my chair and then crawl past the edge to find a spot in which to sleep.

The next morning saw us out and about under cloudy skies and rain. We took my friend's Dad on some errands, went to lunch at Mi Pueblo, his favorite Mexican place, and visited two parks, both of which are on the National Historic Register.

The first, Bethabara, is one of the oldest Moravian communities in the area, The second, Tanglewood, is the former estate of R.J. Reynolds. There are playing fields, camp grounds a B and B and a Reception Center, walking paths and other things available. As it was raining, I did not get many photos. More will follow in the next post.

We then went for ice cream at Mayberries. This was followed by a concert at the Unitarian church where her father had been the minister prior to his retirement. A fund raiser, the concert featured three distinguished professors of music, voice and piano and benefitted a community school with a large population of at risk children.

Thanks to those of you concerned as to my whereabouts. More to follow. 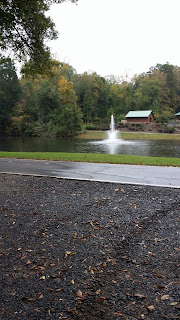 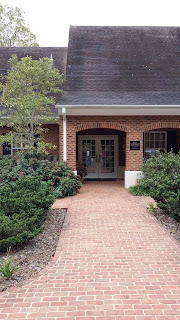 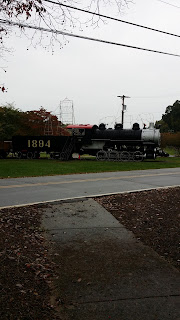 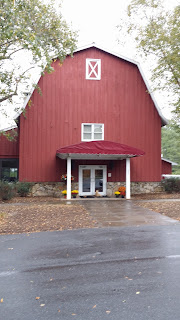