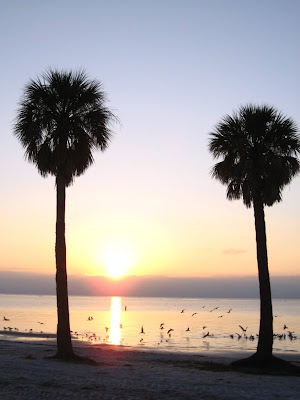 It's hard to believe that almost a month has passed since my last entry. I have been busy and on the rare occasion I made it to the beach, the digital camera somehow missed the mad rush out the door. This is another of a collection of photos taken by a friend last fall.

We've alternately sweltered in humidity and been deluged with recent rains...Today is dry and would be beautiful but for the heat. I've been doing marathon cleaning and re-organizing in the flat with the help of another generous friend. Happily, all of the art and photos ensconsed in wrapping since I resumed residency following sinkhole repairs in 2007, now hang smartly throughout my home. My friend also made a gift of bookcases she cut, put together and painted, allowing me a place for boxed books and other items that previously graced one of two closets in this flat.

I should point out that I am a minimalist by nature, routinely sorting through and donating what I no longer use. As of this post, two loads have gone out the door and I am in the process of figuring out what else to find a new home for. My television and old car are history, as are a large bag of books and a host of miscellany.

This clean out also unearthed complicated feelings as I also unpacked things that once belonged to my mother and grandmother. These I rarely use because most entertaining nowadays is outside the home and far less formal than in generations past. I'm still working out the issue of "too much stuff."

Amongst various things, I found my mother's Pentax. Operated by battery rather than manually, the camera was in sad shape as the battery had corroded sometime ago, rendering the camera beyond salvage. I'll never know what the last photos she snapped contain...another of life's little mysteries. Its case, a supple, felt-lined pouch, has been washed and for the time being, contains my digital. The difference in size and weight between the two cameras is striking testimony to recent advances in photography.

As I prepare for the arrival of my new chair and ramps, the furniture in the front of the flat has been re-configured, albeit minimally. I'll see what more needs to go as events unfold. In the interim, I'm due to hopefully finish occupational therapy for the wrist and arm tendinitis brought on by rolling around in a much heavier folding manual. Dubbed Bertha Butt, the wide, clunky and heavy chair has nonetheless provided some memorable adventures, which I'll save for future posting. The new chair has already earned the moniker Godot, referencing the illusive character in Samuel Becket's play, Waiting for Godot. I'm getting good at waiting...to my eternal chagrin. Meantime, a trip to the land of the "governator" remains to be sorted.

The four-legged creatures who deign my occupancy of their space have been a bit rambunctious, running through things headed for charity, observing what appears confusing from afar, and generally giving me quizzical looks about the invasion of their favourite hiding places, the closets and cabinets. They're not entirely certain this spree of mine is a good thing. They are far more enamored of my new blue specs, another recent acquisition.

Like Baino, I headed for a decent discounter, thinking about her blog entry concerning outrageous cost all the while. Finding nothing eye-catching in red, I spied the blue specs with sparkly studs and the deal was done. My heart only flipped once over the bill as a second pair in matte black and polarised shades were also included.

Photos will follow as time permits. It's hard to believe that another July fourth holiday is half over. At this juncture in history and in this time of globalisation, I wonder whether independence, both individual and collective, means to present generations what it did to America's founders?