Wishing You All A Happy Christmas and New Year...

I'll resume blogging next week. Have a good one and enjoy whatever celebrations and traditions you call your own!
Posted by e at 9:54 PM 11 comments:

Dismal weather...and a mood to match...

It has been raining here for most of the day, dark, dreary and wet, and I believe more is expected Friday. A welcome break that was actually drizzle found me ferrying refuse to the dumpster. It is really quite something to plan chores between downpours and this is unusual for December and happening in other places as well, apparently.

It did not help that I awoke after a broken sleep feeling slightly feverish. I've cancelled lunch plans and declined another invitation, hoping to go back to bed, a hot mug of tea at the ready.

The cat is perplexed and wondering why his playmate is lying about like a lump. He's decided I make a great cushion and has been kneading rather relentlessly. Meant to convey affection, this behavior often also signals his desire for breakfast. As it is almost 3 AM, I'd say he's a bit early...
Posted by e at 11:43 PM 6 comments:

It has rained for most of the past two days with most of it coming down steadily last night. Gray and overcast skies meant we were cool. I managed to get groceries today without getting caught and while I expected further rain this evening its cessation was a nice surprise. Though tornadoes were possible, according to area meteorologists, none happened here. It feels more like November than mid-December.

Long-awaited lunch plans with a friend who has been abroad were hastily and as it turned out needlessly changed to this coming Friday. The exterminator and massage therapist will both visit Monday and I've a pile of bills and correspondence begging for attention. Another friend has momentary tummy troubles and yet one more is planning knee replacement. The fifties have been a real kick in the pants in some ways, and because December marks a particularly stark anniversary for me, I've drawn inward a bit more than usual.

My balm appears to be music of all genres, thanks mostly to YouTube, and I focus upon that for which I remain grateful. I also notice that while possible change of housing still looms large, mentally and emotionally, I've begun to let go of my attachment to this place. I will have been here for twenty years in February of 2019, something I still find hard to believe. Though I like the apartment, it will be very easy to leave the neighbors and this HOA behind should ongoing negotiations result in a sale of the property.

In the interim, the cat and I take refuge in our routines. He sleeps, I read, write and meditate, holding open my curiosity about what the future may hold. My subconscious mind is in a bit of overdrive since the last two non-fiction books I've read each deal, albeit differently, with the subject and realities of homelessness and the growing problem of lack of affordable housing.

Florida is not cheap anymore. While it is still possible to find a "reasonably priced" abode, the market is crowded with vulture investors and myriad flippers, all eager for their piles of cash and property insurance rates are another matter entirely. I may not have the luxury of time in weighing any decisions if and when the time comes simply because things can change on a dime in this market. Additionally, if there is a deadline for leaving, that will only increase the pressure to find a new home of whatever sort quickly.

Right now, however, I must get to bed. My brain needs respite. 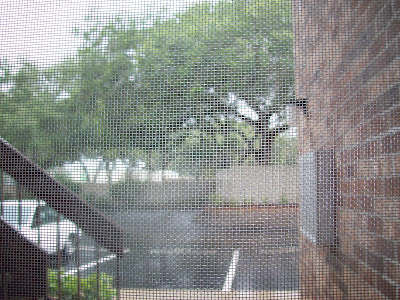 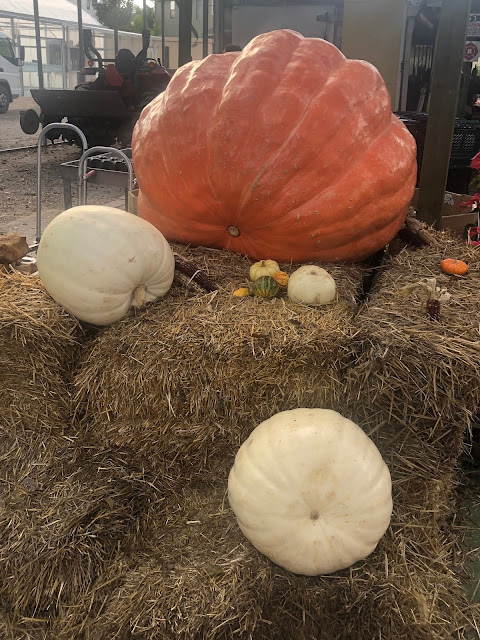 Photo courtesy of I. Dieng

It was been unseasonably warm in my part of the world today. Venturing out amid throngs of Christmas shoppers, I saw this display at my favorite produce stand and asked my driver if he would kindly snap a photo. I've never encountered a gourd of this size. I'd have asked about it but the stand was crowded and with all of the comings and goings, the cashiers did not have time to breathe, let alone answer any questions lobbed at them.

Thanks to all who commented on my previous post. Wishing everyone a good evening.
Posted by e at 3:20 PM 8 comments:

To those of you remaining faithful readers, my apologies. Thanksgiving, the birthday of a good friend and a Hanukkah party all piled up quickly. The good news is that the rest of my Hanukkah week will be a quiet one, something that I relish.

Part of a celebratory trio for a friend's birthday, we all enjoyed the film Bohemian Rhapsody. The actor portraying Freddie Mercury did outstanding work. During his heyday, I was a bit of a Freddie fan. I loved his vocal range and willingness to push limits as an artist. I can't say I liked the drugs, booze and sex which contributed to his HIV onset and early death, but his handlers and others with whom he surrounded himself seemed to encourage risky behaviors. I've often wondered whether the stars fans support who burn bright do so at the mercy of a sense of immortality.

The film took me back to the eighties, a time when more than one friend received diagnoses of the mysterious illness which came to be called HIV. I still remember vividly the controversy and editorials found in both the local and national press, the darkness, prejudice and vitriol hurled at gay activists, children and adults identified as having HIV and the unsuccessful lengths some celebrities went to in an effort to avoid public exposure. Politicians and government agencies did nothing to help matters and it was largely through the efforts of doctors, researchers and gay activist groups that any meaningful response to a frightening epidemic began.

My first trip to an area hospital's AIDS floor as it was called, involved donning a floor length sterile gown, mask and shoe covers before entering the bedside, upon which I was forbidden to sit. Nurses insisted I use the single chair and no physical contact such as a hug or simply grasping my friend by the hand, was permitted. The nurses on this floor had volunteered to be there and at least a couple had done so after having a friend or relative die of the disease they were so desperate to fight. Working on a panel for the now famous AIDS Quilt later was my way of paying homage to the lives lost and supporting the partner of the first friend who had died. That partner is today advancing into old age, happily same-sex married, and still committed to supporting HIV-related activities and organizations serving persons with HIV. Discrimination still exists despite the gains in knowledge about this disease and its prevention.

As a twenty-something, seeing mortality up close sobered me. My once carefree attitudes to personal behaviors vanished almost overnight, replaced by a sense of foreboding. Once thought to infect only gay males, HIV is now commonly found in all segments of the population and is on the rise among the elderly. Women have not been spared and the push to know one's status, the slogan accompanying World AIDS Day, December first, is a cataclysmic shift from the ignorance and fear that once shrouded this viral entity and all of its manifestations.

Freddie's untimely demise in 1991 was tragic but I like to think his spark, and that of others who preceded him, was fuel for the research and medical gains made in the fight to understand and prevent HIV, an effort which continues.