It is 4 AM and after answering the call of nature, I mopped and took the trash to the dumpster, squeaking loudly there and back. The noise is a signal that my chair too requires a good cleaning. which I've just completed.

The resident feline is dithering over his breakfast but taking his pills with the aid of salmon-flavored probiotics which are crunchy and when combined with a softer portion of pill pocket hold the pill on, he crunches quite happily. I am going to see if he continues to need the anti-histamine and if so, get it as a transdermal for his ear.

The bathroom and kitchen are mopped. the chair has been dealt with, along with the trash, and I've fed us both. Though I;ve several other tasks to complete, I've earned a cup of tea... 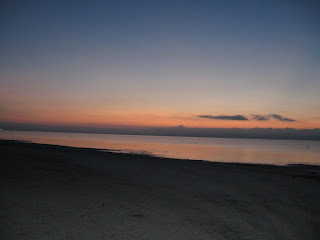 Lukas has launched a kitty coup. It seems his love of pill pockets and the pills therein is being so sorely tested that he hid the largest of his morning pills, already broken into quarters,  in his litter box.

This is not good news for his allergy and certainly not for yours truly. Anyone who has ever had the misfortune to pill a cat without the aid of morsels chances a game of catch-me-if-you-can, a scratch or a bite if not quick enough.

Despite his sweet disposition and complete trust, my almost eleven year old cat has laid down the gauntlet. It will require some creative disguises on my part before another pill passes his lips.

Just when I thought things were improving... 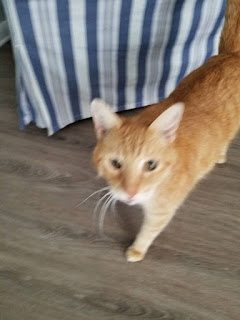 Lukas just arrived home from a check up. In addition to his kidney and blood pressure issues, he has an ear infection caused by allergy and a heart murmur. The murmur may or may not be permanent, we don't yet know. He is now on five medications. Otherwise, his lungs and blood pressure are stable, and we await the results of blood tests. He is in good spirits and happy to be free of his carrier. He will see the vet again at the end of October for an ear, murmur and blood pressure check, barring anymore unexpected symptoms. 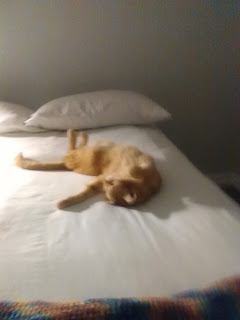 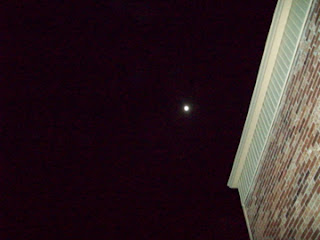 I followed the partially hidden moon as I made my way outside to our recycling bins. At 11 PM, the night was cool and with no-one else in sight, I felt free to have a bit of a roll around in some fresh air.

It fascinates me that an orb some 234,885 miles from earth has always held me in its thrall. As a kid, I would watch from my bedroom window as it rose in the evening sky, following it for as long as I could before clouds obscured it. I loved that its shape and color could change with the days and seasons and that authors and others I knew would write about it. The second generation to enjoy Goodnight Moon, often read to me by my grandfather, by middle school I used many of my regular trips to the library to discover more about moonrises, moonsets and lunar affects on tides.

While Margaret Wise Brown's book features a bunny who says goodnight to everything in his room before going to bed, including the moon beyond his window, the only part of that habit that stuck with me after toddlerhood was the desire to see the moon every night, a ritual I kept for myself no matter location or country.

Now, it is not uncommon for me to keep an old set of opera glasses at the bedside for the desired peak before bed.

It is early morning here and awakened by the cat at 4 AM, I have eaten, fed him and endeavored to deal with a loose caster screw in one of my small front wheels. Much to my chagrin, despite having every flat and Philips head screw drivers, nothing is working so I am now going to search for a repair kit for my 2009 Tilite and hope I find something that works.

I ordered two cushion covers for the seat and got exactly what I did not want. The middleman seller is a supplier and not the manufacturer, so several phone calls later, I placed a new order for what is now a custom item and was told I could keep the covers from the original order. The second order is for what is called a shower cap cover. No zips which break because they are nylon, and no pockets. They are easy to put on and take off with simple elastic but the areas around the elastic now have holes. I have used duct tape on the underside and I'm looking for a patch for the top. Most of those are iron on and I don't own an iron. I will need to see if the multiple holes can be repaired with thread.

After several dry, overcast days, it is once again pouring rain as I write, no doubt from some system. As long as it is not a hurricane, the water is welcome, though we seem to have had an overabundance this summer. As always, I eagerly await our typically rainless, somewhat cooler winter.

The kitchen at chez moi has been an uncharacteristic hive of activity as split pea and matzoh ball soups, salads and a new-to-me breakfast cookie were attempted and enjoyed. The cookies were found on You Tube courtesy of Dani Spies at Clean and Delicious. The basic recipe is three ingredients: rolled oats, mashed banana and chocolate chips. My choice of chips is from Lily's Chocolate and are stevia sweetened which contain no added sugar.

They were baked at 350 on a parchment lined tray, cooled and placed in the refrigerator in a covered container. They will bake up to the size you form and I got 10 from the recipe because I formed them slightly larger. The hardest part was letting a mixture of two large fork-mashed bananas mixed with one cup rolled oats sit for 20 minutes so the oats could absorb some of the moisture before baking. Neglecting this step leaves the cookies dry and crumbly, as I discovered. According to Ms. Spies, this recipe is flexible. You can ditch the chips for raisins and or nuts, add a dash of vanilla, honey, maple syrup or cinnamon or whatever you like. I will enjoy  experimenting with some nuts or flax or other dried fruit but liked the taste, texture and simplicity of the original with tea or coffee. I cannot seem to abide oat meal in a bowl but this is a nice alternative.

My birthday was a quiet affair with a few cards and messages and an unexpected gifted bag of shelled pistachios, a long with two books from a friend.

Lukas and I are fine and plan to catch up on various things here in the next couple of days. Cheers and stay well.