Angel At The Rainbow Bridge...

There is a widely circulated poem called the Rainbow Bridge, author unknown, that asserts the existence of a heaven for animals in which those who were ill are restored to health and vitality. They can run and play, enjoy sunshine, have plenty of food and water, but it is only when they finally glimpse and re-join their human friend that both are complete and content. You can find the poem on the Web.

I find it comforting to think of Angel as the active, playful and very vocal Siamese princess she once was. The other two cats and I are in shock since none of the major health crises Angel experienced were at all anticipated. Circumstances forced my hand and she was humanely euthanized earlier this evening. I will post more about this at a later time. Thanks to all of you who responded with kind words and wishes for her good health on my last post. Sadly, that was not to be.

An Angel Update With Photo

Angel is feeling a bit better and has eaten three meals today. I spent the day in a flurry of phone calls with her vet, the Arizona pharmacy that will compound her latest thyroid medicine, and the specialist veterinary practice Angel's vet sends cats to for radio iodine treatment.

If Angel refuses the flavoured medication to be placed on her food, radio iodine treatment will be the only remaining option open to her. This apparently involves the injection of a small dose of radioactive iodine which shuts down the thyroid. Angel would remain in hospital for two days, then board for two weeks at her regular vet clinic. I chose boarding because she will be minimally radioactive for two weeks following the radio iodine injection and the vets advise keeping her away from other animals and keeping human contact minimal, both of which would be difficult in my small flat.

While the radio iodine treatment takes only minutes to administer, it is not cheap. Additionally, Angel would undergo several tests and an examination prior to this treatment, all of which are included in the $1350 I was quoted. I hope that the new medication works so we don't have to travel that road. 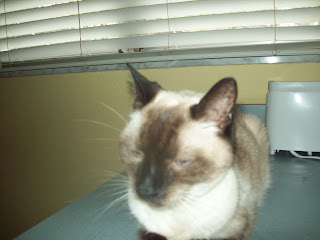 Angel got annoyed with my picture-taking antics. I finally caught her on the kitchen counter.

My almost-seventeen-year-old Siamese has always been a bit of a handful. She began her life as a beguiling stray I retrieved from a rubbish bin in a former workplace. She was no bigger than my palm and not yet old enough to be weaned when I found her. I have no idea what happened to her mother.

It took me three years to convince Angel that she did not need to crawl inside the kitchen garbage bin in search of scraps. Often. I would arrive from work to find Samantha, my three-year-old Korat, sitting in front of the kitchen garbage can waiting for me to collect Angel, who sometimes emerged from her foraging looking the worse for wear. Once, she had tomato sauce on her head. Another time, it was chocolate on her front paw. I quickly learned to dispose of my trash daily so as to avoid these episodes.

Meanwhile, Samantha took Angel in hand and showed her how to be a proper fastidious feline. The two became inseparable. After Sam's death in 2008, Angel cried every night for a year. Never a large cat, Angel has always been thin but old age has made her bony. A thyroid problem, discovered two years ago, complicates her health, as does feline upper respiratory virus. Additionally, however, Angel's temperament is problematic because she is medication averse and has quit eating the special YD food her vet prescribed to control her thyroid. She prefers her Hills Science Diet and normally eats three to four meals of this daily.

Siamese are quite "talkative" and Angel is no exception unless she is ill. The normal trills of friendly greeting or the persistent meows indicating hunger or thirst pale against myriad purrs, head bunts and small licks she regularly bestows on me; her favourite place to sleep is on my feet. Unfortunately, she is a light sleeper and regularly attempts to awaken me at four in the morning, a situation I loathe.

This weekend neither the other cats nor I have gotten much sleep. Friday night, Angel sequestered herself beneath my bed and began low pitched crying. I called the vet and had her seen only to be told we would need to wait until Monday when the results of the latest blood work are due back from the lab. After vomiting twice, her crying and lack of eating continued into this afternoon when an injection administered to settle her stomach took effect and she was able to sleep.Thank God her veterinary technician makes house calls.

I will attempt some shut-eye myself and hope that this is nothing serious.