Unless you are two years old...

At sixty-one, it was a bit of a nasty surprise when, after eating a sandwich, I cleaned up only discover something strange on my foot plate. The offending smear was none other than peanut butter. Since none had gotten on my clothing I was mystified that its exit from the sandwich entirely escaped my notice. What did not however was the uncomfortable squishiness that resulted from having peanut butter between my toes...

While I'll admit to various toe-related adventures in my youth, they did  not include nuts of the edible kind...

Pandemic living, just got to love it...

Earlier this week, Lukas had a vet visit, His kidney panel came back better than expected given that changes are happening and he will have chronic kidney disease until he passes away. Because of his kidney issues, however, he has developed high blood pressure for which daily medication is now required. Additionally, he is having allergy troubles so was given antihistamine medication.  He returns to his vet next week to check that the blood pressure medication is doing the job and is meanwhile enjoying food, companionship, naps and toys. He will celebrate his third anniversary with me at the end of the month and his tenth birthday. Extra treats are in store.

Other than that, a thank you is in order to Wisewebwoman who late in 2020 lamented a lack of good Irish tea. I went looking and found it on a large online retailer and gave her that suggestion and have since started drinking the decaffeinated version of it myself. 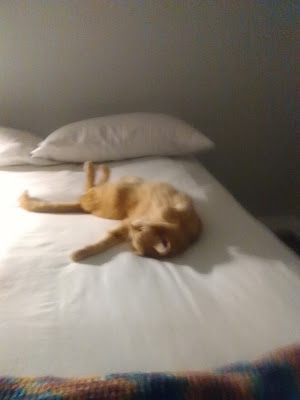 I have been an American voter since my eighteenth birthday in 1977. On that day, I was shaken awake and told to get dressed and meet my stepfather downstairs in the parking garage for the building in which my parents owned a condominium. I was facing my final year of high school and we were due to fly "home" in the next two weeks for the start of the school year for both my mother and I, so preoccupied with that, I gave little thought to the demand for my prompt appearance beyond asking where we might be going.

The answer, a cagey, "You'll see when we get there," told me only that a surprise was in store and that my stepfather, whom I called dad, had charge of whatever it was. Our meeting at his truck did not include my mother, a sure signal that this was no ordinary outing.

Realization hit when the county courthouse came into view following a short drive. Making our way through the front doors and into an office, we were greeted by a spectacled older woman who looked up from a stack of papers and asked how she could help us. My stepfather thumped me on the shoulder announcing, "She is finally old enough to vote as of today." Birthday wishes and thankyous were followed by paperwork and the inevitable question, "What party affiliation would you prefer?"

It was at this point that my stepfather stiffened as the word "democratic" slid from my lips without a moment's hesitation. A Republican since John F. Kennedy's election in 1960, he had become a staunch conservative despite growing up in a democratic family and would later support Ronald Reagan, as did my mother. He viewed my decision as youthful rebellion but did not try to change it and because of our many disagreements at the dinner table, it should never have been a surprise to him.

What might surprise him were he still among the living is that, in line with his view of patriotic duty, I vote conscientiously and after much  reading, research and reflection. I, like many, voted in 2020 and held my breath as the final results were decided.

Last night, following the inauguration and celebrations, tears welled as I thought of  the gaping divisions in this country and the monumental job facing now President Biden and Vice President Harris. While I am impressed that both have hit the ground running, I hope we all don't face four years of House and Senate wrangling or gridlock, particularly in these pandemic times.

It was nice to awaken today without a sense of dread. Whatever lies ahead, may cool heads prevail.