I will be staying elsewhere while renovations are completed at home. As I have a desk top computer, I will not be blogging until my return. Have a great week or so. 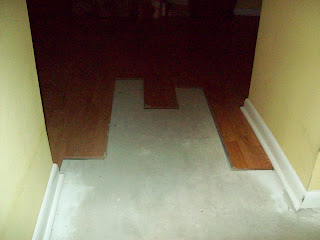 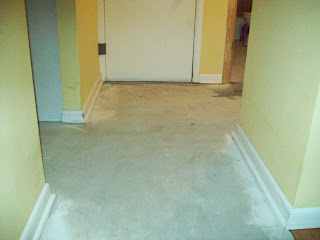 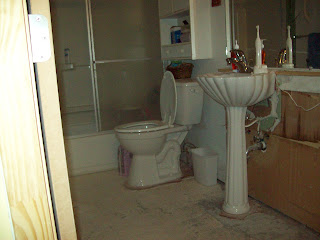 These are photos of the hallway and the partially demolished bathroom with its widened doorway. Not glamorous yet, and the concrete slab makes the flat colder and dustier than normal.  This too shall pass, though none too quickly for me.

I got a ride over to the cat hospital, anxious to see Jacob and Phoebe. I'd not seen them in over one week and wanted to reassure them that their favorite human was still around. Taken back to the boarding cages, I found Miss Priss hiding beneath her turquoise towel while himself lounged on an orange blanket. Upon seeing me, Jacob began meowing. I wasn't sure if he was happy or wanted to curse me out for sending him to the hospital. Phoebe did emerge from her den, to get her head scratched and purr at me. She would not venture beyond the cage. Jacob, however, was only too happy to be let out. He gave my lap short shrift and began walking through the clinic as if he owned the place...
No time for Mama...I hope he's not disappointed to return home next week.

The past two months have gone by in a flash. Since the death of my Siamese Angel, my remaining cats have adjusted rather unpredictably. Phoebe, my little "scared cat," who likes no-one but me, has become more affectionate. Jacob, her opposite in nearly every way, has become an almost full time lap cat. Both are currently enjoying a "staycation" with the staff of their cat hospital, which now provides boarding...

In mid December, I awoke to the sounds of water dripping in the utility closet in my flat's small hallway. After frantically calling a non-responsive contractor and several friends, one of them happily gave me the number of her sister's fiancee. He is a contractor and has been a life saver. He drove in on a Sunday and after quickly determining that the source of the leak was from the hot water heater in the apartment above mine, he purchased and replaced a needed hose. Unfortunately, damage had been done.

The owner of the unit uses it as rental property, so while its tenant was sympathetic, she could do little to help. The owner initially misfiled a claim and it was twelve days until his company adjuster showed up. In the interim, I contacted my insurer and got a water remediation company in to dry to floors and closet. Approximately thirty percent of my laminate flooring had to be taken out and the concrete subfloor dried. Additionally, the air handler and hot water heater needed to be taken out, the closet dried and treated with anti-microbial chemicals to inhibit mold and the walls and ceiling drywall in the closet taken down and replaced.

The hall space is so tight in this flat that the driers and other necessary work meant no access to the bedroom or bathroom for me and a potentially frightening experience for the pets.They were boarded and brought home, then re-boarded as a succession of subcontractors and my general contractor as well as an inspector have been through our home. I have had two stays in a nearby hotel and now await the installation of new flooring.

Since the hall floor was out, I asked my general contractor if he could expand my bath and bedroom doorways to bring them into compliance with ADA requirements. The 36 inch openings are so much easier to navigate, and an ADA compliant roll in shower, sink and toilet are in the offing. The shower requires changing the location of drains and pouring a properly sloped floor. These need to be finalized with an inspector before further work is completed. I will be leaving for yet another hotel this week.