It is hard to cram everything in that I want to remember about the photos in my previous posting except to say that they are but a few favorites. All but the very last were taken in 2009, the year this blog began. I had purchased a cheap digital camera, the first camera I'd had in about twenty years, and gone on a bit of an expedition to a nearby beach community with a friend from grad school. My mobility was failing at the time and I was awaiting the chair that would eventually become my legs, so many of my pictures from that outing were taken in unorthodox ways---from car windows while riding, on sidewalks, using weird angles when I could no longer stand comfortably, etc. The last two, which show my aging head, were taken by various friends. It is hard to believe my hair is now almost white...

The sculptures in the first photo were in the lobby of an older building downtown and I was unable to find any information about their origins which is unfortunate. I remain fascinated by portals of various kinds, both in terms of the opportunities and closures they represent. The others are two wonderful beach spots and a park, neither of which I get to visit often or easily these days... 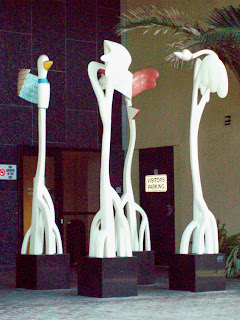 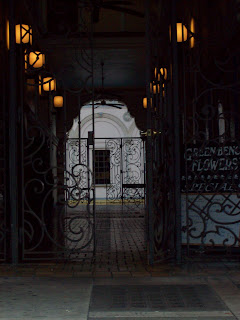 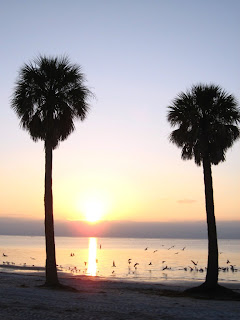 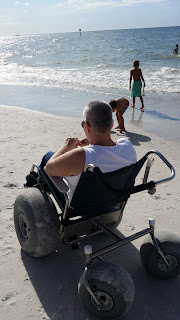 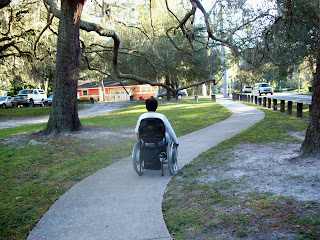 
Despite living in a region known for milder winters than others, it seems that my yearly adventures in upper respiratory hell always appear. I have been fighting something for the last week that has now bloomed full force. Normal blogging to resume when this is over.

Seven Years of Blogging: Part One

Life in Progress began as what I hoped would be a daily diary on January14, 2009. My friend Steve, a former journalist and editor and a blogger friend Barbara were instrumental  in persuading me to give blogging a try. As a former freelance writer and editor myself, I knew that writing for me was almost akin to breathing. No matter that I had become a librarian, had my eye firmly set on a future PhD and life as an academic, the writing bug would rear its head and I would have no choice but to follow in its wake.

Years of producing client-centered materials had left me a bit weary. The recession that began in 2008 and whose effects are still felt in some quarters today, marked the end of an almost twenty-year freelance career, a circuitous path dotted with other jobs at various intervals. Coinciding with the receipt of a second Masters and my hopes for a new life, however, were unexpected and increasing problems with mobility.

Diagnosed with what had always been a rather mild case of cerebral palsy in infancy, I had nonetheless grown up as an active individual and despite wear and tear to my ankles and feet, and occasional problems with my low back, expected to remain so. Frequent falls and a leg that would suddenly give way without warning changed the trajectory of my plans and it was at this point that I began life as a blogger.

Always private person, I kept paper journals, a habit developed in late childhood that stuck with me well into middle age. Although I was aware of blogs and no stranger to emerging technologies thanks to my library experience, I had no real idea about what to do or expect from a blog of my own and no real interest in Facebook.

My first postings were vague and consisted of photographs I had recently taken with a friend from grad school. Having always written for clients, I was wholly unaccustomed to writing about myself for public viewing and found it awkward going. While I still shy away from revelations of an extremely personal nature, my wariness has lessened and over time, I've made the acquaintance of some very nice individuals, several of whom stand out.

While I've fallen away from a daily schedule of writing, I do post regularly and make it a point to be truthful, polite and to the point. I also sometimes share pieces of creative writing, stories from my younger years and snippets of things that I'm working on. My goal in writing this retrospective piece is to include some of these things here over the next few days since my readership is now vastly different from what it was when I started. To those of you who have stood the test of time, and others who have only recently come to read here, my thanks. I wish you all health and happiness and continued blogging.

I'll begin with a synopsis of my second post on 15 January 2009: Grateful for Small Things: It concerned the emergency landing of a commercial airliner in New York's Hudson River.

one hundred and fifty people and their flight crew, bound for Charlotte, North Carolina, collided with a flock of geese, which caused dual engine failure. The pilots and crew executed a water landing after only three minutes in the air, and all aboard were able to get out alive, averting possible tragedy.Events such as this make me realize how much there is to lose when a life is at stake and how often I, like most people, assume that tomorrow is guaranteed when, in fact, the opposite is true. Life can and does change on a dime. In this case, with the meeting of geese and plane, two disparate things intersecting in the sky...

Do you remember where you were that day?