Wet And Waiting It Out...

The weekend was soggy and yesterday, I got caught in the deluge accompanying feeder bands from tropical storm Debby, which is now drenching the northern portion of the state. My raincoat, which is lined, was soaked through as were my clothes. My neighbour, with whom I do the week's shopping, decided he could not wait until today.

It took about an hour to deal with sodden bags, water on the floor and a soaked chair and cushion, but once that was cleared up and I was once again in dry clothing, steaming tea in hand, I enjoyed catching up on e-mails and correspondence, at least until the lights began flickering. Fortunately, they never went out completely.

More rain is predicted for this afternoon and the remainder of the week. Debby, it seems, has stalled since the original predictions had it heading to Texas...

Any excitement where you are?

I live in what is commonly referred to as a two-storey walk up. The two upstairs flats are inhabited by single women, one a young, well educated professional who is polite and kind. The other is in her fifties and lives at the behest of the government. She is mentally ill and in the time she has been here, she has had outbursts and threatened suicide, which brought members of the sheriff's department to our community. Additionally, she is prone to telling outrageous stories--the products of her strange and twisted mind. She is supposed to be on medication, but having seen her either high or drunk many times over the past six months, I wonder if she is taking it at all or whether it is working in the presence of other substances.

While I might normally feel sorry for an individual in such circumstances, this woman has told neighbours that I sometimes look as if I'm on crack and that I'm faking being disabled, both of which are untrue. She has also said everyone here is out to get her and that she is spied upon, among other things. She has awakened me in the darkest hours of the night screaming obscenities on the stairs or at my door to the point that I've now put the sheriff on speed dial.

Last week, this escalated to vandalism, when amid a loud and steady stream of curses, she lobbed expensive jarred marinara sauce at my door. I discovered the mess the next morning and notified our management and the sheriff's office.  The culprit, when cornered by the deputy, lied, but since she is now known to his department, he knew better. She's been quiet since his extremely confrontational warning, and the mess was promptly cleared. Her landlord will receive the clean up charges. I spoke to the landlord briefly. She no longer communicates with this tenant, but calls her twenty-something daughter instead. The daughter informed me that her mother has been between doctors and therefore without medication. Since she rarely shows her face here and seemed rather clueless, I simply told her that I would inform that part of the government that subsidizes housing for the poor here.

This tenant's landlord says she's "attention seeking." I see her as a manipulative liar. Prior to the sheriff's arrival, she flounced down the stairs, took one look at her handiwork and declared, "Let's see if she lets me out of my lease now, ha, ha." Another neighbour also witnessed this.

Had she not made this remark, I might have conceded that this tenant did not know what she was doing in the early hours of the morning. However, the tone and nature of her remark indicate otherwise and she had no right to bring her problems with her landlord to my door, nor has she the right to scream loudly enough to awaken someone at 1:30 AM.

If the state and her doctors find her able to live freely, then she should be just as free to face the consequences of her actions. I have no problem with the subsidy for housing, disability payments or food stamps. What is problematic is indirectly subsidizing her cigarettes, booze and whatever other swill this woman chooses to ingest. Furthermore, her lease was renewed in May, and unless she was forced to sign a new agreement under duress, wanting to be free of this contract makes no sense. Her landlord once lived in this apartment and kept it immaculate. The landlord is a retired individual, now enjoying the stability of a monthly government check for the rental of this flat, a situation she isn't likely to change unless something more drastic occurs.

I am enjoying the relative quiet for the first time in months, but  fear it won't last long and worry about what other tricks "Bellowing Beulah" may pull. I no longer talk to her and avoid going outside when she is on the stairs. I have put a call into a mental health professional in an attempt to get more information about how to handle this situation. While I await a return call, I have also spoken to a property manager and realtor who has indicated a willingness to help me find another flat with a more open floor plan. This may take some time, but current circumstances compel me to at least look around. The photo below is one of several another neighbour and I took to document the vandalism. 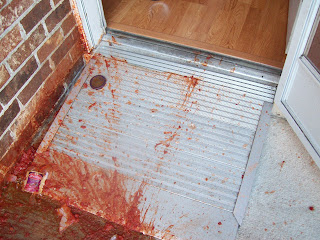 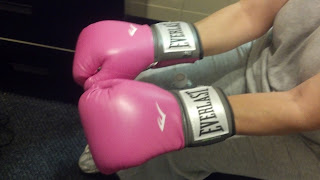 These are my fists, firmly ensconced in 12 oz women's boxing gloves. My trainer purchased these from Amazon.  She plans to use them with selected clients. In my case, to rapidly raise my heart rate while giving my upper body a work out, which means more cardio for me. She and I had some fun this morning watching my fists fly while trying to focus on technique. At one point, she was concerned about me aiming a bit high lest I accidentally knock her over. Boxing from a wheelchair is a bit different.
One does not have to worry over foot work or placement. However, it helped tremendously that I remembered to lock the chair in place before punching...

I'm not normally a fan of pink, but when these were removed from their case, I laughed...

A Picture For Those Who Wondered... 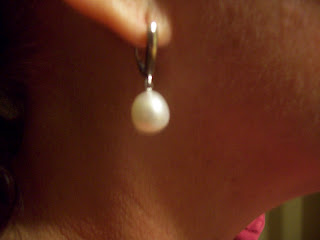 Yes, that is really my ear and one of the pearl earrings mentioned in the previous post. For those interested, the outing on Thursday was wonderful. My young neighbour and I were two of four adults in the theatre. Our film of choice was Salmon Fishing in the Yemen, which we both enjoyed thoroughly. I thought that my neighbour, who loves typical Hollywood fare, might not enjoy British humour. I was wrong. He loved it and was delighted by the story and the romance. He did say that this wasn't the kind of film one could leave and come back to without missing much and he is right about that.

The particular theatre we visited was a bit of a drive, but as the only venue currently showing this film, it was also lovely, except for some construction or remodeling, which we were able to avoid entirely, thanks to good signage. Being a weekday, there were no crowds and minimal traffic, so parking was a breeze. Seeing films during the week is a habit I could easily adopt. I am grateful that my neighbour was willing to make this trip since the public transportation between counties would have been dicey at best.