It seems my pleasure in watching films via computer is no more. For the past two weeks, every film streamed from my Netflix queue slows and dies, freezing the desktop Dell to the point that it must be turned off and re-started several times. Discussions with customer service representatives at Netflix and my ISP have not revealed any problems from either. The ISP representative suggested switching from Internet Explorer to another browser, which on the face of it is worth a try.

There are no viruses, bots or malware involved, as I have run scans, so my next alternatives are to clear out unneeded files and software and see if things won't run more smoothly and begin computer shopping. Neither prospect appeals as one is time consuming and the other expensive. I also do not want to buy a television or the cable necessary for decent reception here.

Email ThisBlogThis!Share to TwitterShare to FacebookShare to Pinterest
Labels: Streaming; 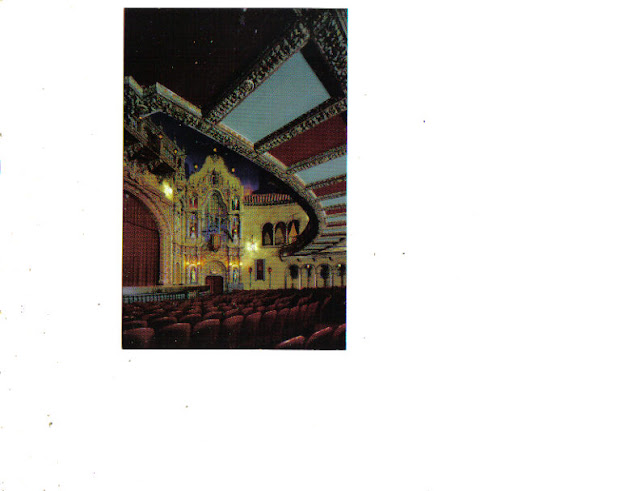 Built in the 1920's, the theatre, then known as a Movie Palace, opened its doors in 1926. Its exquisite interior, designed by John Elberson, a renowned theatre architect, was spared the wrecking ball in 1978. Through the efforts of concerned citizens, the theatre is now part of the National Historic Register and supported by the Tampa Theatre Foundation, donations and patron memberships. For further information, visit http://www.tampatheatre.org/.

This is a great venue for everything from art house and independent cinema to plays, concerts and summer Sunday movie classics. I saw the film Sarah's Key, starring the always excellent Kristin Scott Thomas. Though not shown here, a Wurlitzer organ opens every show, emerging from a pit through the stage floor.
﻿﻿﻿﻿
﻿
﻿
﻿﻿﻿﻿﻿﻿﻿
Posted by e at 12:09 PM 7 comments:

Email ThisBlogThis!Share to TwitterShare to FacebookShare to Pinterest
Labels: Theatre;

It has gone from drearily overcast and rainy here to ominously black and threatening. Our temperature last I checked was 79 which would be balmy but for the 88 percent humidity accompanying it. My mail for the last two days has been water logged, a cruel irony when in the UK, parts of London and Manchester were burning.

While I have no answers as to why such astounding behaviour took hold and apparently succeeded before police intervened, the hand-wringing of the mainstream press continues, and likely will for days to come. I e-mailed some bloggers in London and finding them safe and sound, discovered a post by Zoe at her Mind and Language blog that is worth reading. See http//mindandlanguage.blogspot.com/2011/08/rising-up-against-riots-in-london.html.

This describes a local attempt to aid the police in stemming looting. Please read it for yourselves. In a world which sometimes appears to have gone mad, efforts such as this restore my faith in decency and commonsense across racial, ethnic, political and economic lines. I only wish I knew more about the individuals involved.

Email ThisBlogThis!Share to TwitterShare to FacebookShare to Pinterest
Labels: The world;

Done, But Not Yet Dusted...

My birthday was fun. Unfortunately, the camera's batteries were flat, so no pictures this time. I had dinner with two librarian friends, who came back to the flat for surprise cake provided by my two favourite neighbors. They supplied two small cheesecakes festooned with candles and birthday greetings.

The resident felines stayed out of the way, though Jacob, my ever-charming tuxedo, positioned himself in the centre of the group, the better to keep an eye on his human. He is always the hit at any party. I've never seen a cat garner as many compliments as Jacob. He is curious, friendly, vocal and has markings to die for, so my die-hard cat loving friends agree.

The festivities continued last night as another neighbour, her adult twin sons, their families and I shared our birthdays and conversation over cake and ice cream. Tomorrow, I will share dinner with yet another group of friends. My thanks to those who called, sent cards or popped in. In true diva spirit, I'm celebrating all month long.

I've also accepted the challenge of growing my hair. Gone are the spikes of my early middle age. I now sport a bob that has grown to just past my chin, and this only with the guidance and patience of a stylist I've known for 17 years. The ultimate goal is to grow my hair past the elbows and provide a donation of ten inches in a clean braid to a not-for-profit organisation known as Locks of Love that provides prosthetic hair pieces to children who've lost their hair due to a medical condition such as cancer. These can be worn swimming, during sports or in the shower and the child will never fear losing his or her hair again.

Every year, two weeks prior to my birthday, I commemorate the death of my mother due to cancer, usually with a charitable donation of some kind. I did the same this year but also felt the desire to do something a bit more personal. Because I know that hair loss can be a traumatic reminder of the changes that accompany a cancer diagnosis, it seems fitting to try and ease that burden for a kid. Anyone interested can Google Locks of Love for further information.

Just When You Thought I'd Fallen From The Face Of The Earth...

It seems that I share a birthday with England's Queen Mother, Louis Armstrong and President Obama. My accomplishments as a mere mortal pale in the presence of these luminaries, however, I can happily report being alive, educated, a decent friend, concerned citizen, reasonably well travelled, an avid reader, bilingual, an animal lover and a fan of football as it is played outside the US.

While you might think that being alive is no great feat, in my case, it was. My then not quite twenty-one-year-old mother was told shortly after my early arrival to prepare for my demise. Instead, she waited until I gained enough weight, took me home, divorced her disaster of a husband, and got us both back to the security of her parents' home across the world in Central America. They worked for the US government abroad, and in growing up there, I became what is called a Third Culture Kid. Those of you who are interested can Google the term.

Long before I heard those words, I knew how to hold my own in a conversation with anyone, had a broader view of the world and silently wished the notion of borders did not exist. I have always felt vaguely like I did not belong here, despite my birth certificate and citizenship. This has not improved with time.

Today, I worry for neighbours and friends who have lost work or face retirement in uncertain times. I think the leaders in both major parties are out of touch with average citizens' concerns and are not doing enough to make our lives liveable here. They also put too much effort in rhetoric and political agendas and not enough in reforms that make sense for everyone.

At almost 52, my life is not what I thought it would be nor is it what was planned. That said, it is still very worthwhile, and I must decide what the second half will contain, no easy feat.