The weather forecast for this area includes a tropical depression with lots of water, lightening and thunder later in the week, I'm going to be digging out rain gear, flashlights, batteries and a can opener, along with extra water in case the electricity becomes intermittent or goes down completely for a time. We'll see what nature brings us which is nearly always a crapshoot.

In the meantime, I have ice, heat and stretching to look forward to, along with an it's-the-end-of August-birthday-lunch tomorrow in my neighborhood with three friends.

My  upstairs neighbors have changed in the last few months and my oldest neighbor moved to an assisted living community in another state. I am now the only owner in my building  in a community that is now more than fifty percent rentals. The neighbor above me, though a bit nosey, is otherwise fine except for one filthy habit: she smokes in her apartment and my unit is now starting to smell. While I do not see plumes of smoke in the air, the odor alone is bothersome and I've noticed a cough where there was none before her arrival.

I've looked online and tried both baking soda and vinegar which are supposed to absorb odors and I do have an air purifier in my front room, but the odor lingers. Having grown up in a family of smokers, nearly all of whom died of either heart disease or cancers, I am very familiar with the fact that this smell leaches into walls, clothing, furniture and anything else in its path.

I'm beginning to think moving might be my only option...Any other suggestions?

I'm still sore, evidently from muscle strain, but things appear to going in the right direction at this point. Knowing this is a chronic problem and will re-cur, even with management, hasn't stopped my pursuit of strengthening, working out kinks and pain or the search for the perfect ice pack or larger than life heating pad. It is what it is, as the saying goes and while not pleasant, is certainly not lethal.

Jacob cheers me up, paws on my chest and deep rumbly purrs as I stretch, exercise or stay on ice or heat for a time each day. His latest trick involves planting his beautiful butt on my keyboard, thus bringing blogging to a complete halt for a time until he is petted, played with or fed, preferably in reverse order. My life would not have been half as much fun without this cat and his endless affection.

Speaking of affection, presents have been coming in recently, the first being from a childhood friend who sent me some cute cats and a shaker set from her aunties house in Peru. Additionally, two blogging friends sent me a T.S. Eliot book featuring the drawings of Edward Gorey. I've always loved Gorey's work. It is worth learning about if you haven't already seen some of it. Stepsister sent a card reminding me that I'm a lovely person, and three friends are taking me to a belated birthday lunch next week. I've got some thank you cards to write...

I am still sore as the massage and physical therapy continue but things are improving for now, the best that can be said for a chronic situation. I was also able to contact my financial institution and have had the fees taken for the stop payment on a deposited check restored to my account. Thanks to all who commented for your support regarding my last post.

Have any of you ever heard of or eaten tomato soup cake? I had my first slice yesterday at a birthday get-together for a friend's elderly father. It is a dense cake full of raisins and nuts and my friend iced hers, with a white frosting which I expected to be cream cheese but wasn't. It is her father's favorite cake and an old family recipe her mother would bake.

In looking up the history of tomato soup cake, I discovered that it is a uniquely American creation dating from the twenties and thirties which experienced a re-surgence in the mid-sixties. According to what I read, most of the original versions of this cake were loaves and served without icing, a nod to the frugality of Depression-era cookery. Later, Campbell's used this cake to promote its soup. There are many photos of this cake online and my friend's was wonderful with coffee. Her father loved the cake, party and his cards and gifts. It was a small and simple gathering but one which brought him much joy.

It is always a pleasure to be around those you know to be caring, honest and decent, a needed remedy to the other situation. Speaking of birthdays, my great-aunt who was really a great aunt, is celebrating her birth today. In her late nineties, she lives with limited mobility, Parkinson's and increasing deafness. Her voice has gotten so soft it is almost impossible to hear when she speaks and time and again, I am reminded of the cruelties of advancing years.

Gone are the days when I could pick up the phone at any hour and find her at the other end, strong of voice, in good humor and always ready to talk of life in her town or the larger world. Like me, she was always reading and loved to talk about books. How I miss those times. I have her to thank for many of my favorite childhood books sent as packages to our home overseas then eagerly devoured and kept as treasures. Of all of my mother's relations, she was and remains a favorite. It is she who most resembles my mother in appearance, though thankfully, not in disposition. Eunice is kindness itself, a quality I see less of in the world today. Happy Birthday and thank you for being such a wonderful human being.

What is the best way to tell someone to take a flying leap?

My pain has gone down, but is still there. Normally, by this point in any past flare up, that would not be the case. I have two further appointments this week. I hope to leave at zero. We'll see.

In other news, I have a former neighbor whose partner died in my home on a visit three years ago. During our trip to the burial, money was lent for expenses and while most has been re-paid, nothing was put forward from December to August when I finally contacted the individual and asked to work out a payment plan for the remainder, which is under five hundred dollars.

I do not, as a general rule, lend money and was apparently unwise to have done so in this situation. We agreed on ten dollars per week, which considering his full time employment,   is generous. The debt was accrued three years ago and no interest is attached.

Two checks have been sent, one of which has a "Stop Payment" attached to it. It came in a letter from my financial institution, along with a deduction from my account of a further $29 in fees. So, it has cost me almost three times the value of of the original check and at this point, I've sent an e-mail to this person asking about the stop payment and advising him of the additional charges. I've also spoken to his institution which will get a message to him.

The level of aggravation to me in dealing with this is simply stupid and at this juncture, I'm strongly tempted to tell this person that he has re-paid my original kindness to him with aggravation I don't need and that he can F----Off. I believe that he, for reasons I won't go into, is trying to force a level of contact with me that I do not want and I do not fully trust him. The death in my home caused trauma and has been hard to deal with but the long and short of it is that I think both individuals had issues and the one remaining will not see a grief counselor and has no ambition to change his economic circumstances despite increasing financial strain which he appears to create the bulk of himself.

Creating this stress for me has cost me money and has lost him any semblance of regard I may once have had for him. I don't know which of us is the bigger idiot, but I'm furious.

The e-mail sent to my former neighbor:
Since you had no courtesy to warn me about the stop payment for a ten dollar check and likely knew that I would be assessed fees for your stop payment and you obviously are not going to comply with our agreement, I am going to walk away from this and from you, permanently despite the financial loss to me.

Had you been as appreciative as you claimed, you would not have done this and might have instead waited to send a check when you were solvent. I am not going to pay fees for your financial insolvency, stupidity or manipulation. You clearly have problems which I cannot help you with and at this point have no further interest in because you are causing problems for me and I no longer trust you.

I ask that you NOT contact me by letter, e-mail, phone, the Internet or any other means ever again. Your behavior shows little honesty or care for the kindness you have received from me either with this loan or in the past and little understanding of the impact this situation has had on me.

You have exhausted my patience, goodwill and sympathy. I am smart enough to know that you may have done this on purpose hoping that I would walk away. If that is so, my peace of mind is worth more to me than what you owe.
Posted by e at 12:30 PM 20 comments:

I apologize for my absence. I have been sidelined by a chronic back issue which flared up and for which I am still being treated with a regimen of stretching, heat, ice, Tens Unit and massage. It is not amenable to medication or surgery and has been extremely painful.

Amid all of this, I've celebrated another birthday and concluded preparations for my Bat Mitzvah this Saturday. The birthday celebration last week was courtesy of a friend of thirty years and fellow blogger, Steve, who was in town from London. It is hard to believe we've known each other that long and it is always good to catch up regardless of the occasion.

After insisting we had to do something special, Steve booked a table at the Edison Food and Drink Lab, a local eatery known for eclectic and very delicious fare. My meal began with a blackberry mock-tail of fresh blackberries, simple syrup, lime juice and club soda and was followed by Buffalo Cauliflower, Ceviche and an entree of scallops. Steve had fish and we finished with purple Thai rice pudding and a homemade peanut butter bar. Having grown up with finely diced and well marinated ceviche, the chunkier version offered here was a bit different than what I expected but everything was divine as well as surprising and our server, Rob, was especially pleasant and attentive.

I will be around to blogs as I am able. I hope everyone is well. Have a nice weekend. 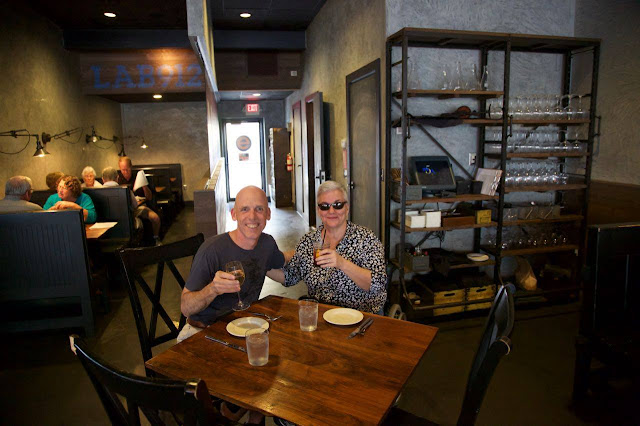