You Wait Here, I Bring Limo...

On a long ago visit to Mexico City, my grandfather and I got lost. Eventually, my precocious twelve-year-old self demanded a loo, so we began rather earnestly looking for a taxi back to our hotel, where we expected to re-join my parents.

The main thoroughfares of the city appeared clogged with traffic of various vehicular proportions and it soon became evident that all of the taxis were in use. Continuing our walk, we spied a young man working in a garage. Sliding from beneath a worn chassis, he asked, "I help you?"

His name was Enrique. A bevy of broken Spanish and English ensued, accompanied by a hastily drawn map. Noticing my grandfather's increasingly quizzical countenance, he gestured for us to stay put, his voice trailing off after, "You wait, I bring limo..."

We weren't at all certain we wanted a ride in a limousine, but as my need for a loo was growing, Enrique's rapid disappearance up the crowded street brought hope of a quick dash to our hotel room's spotless commode.

The shade of the garage offered respite from the early afternoon's rising heat but did nothing against the cacophony of belching exhausts, agitated shouts or horns of various decibels teeming in the street.

When after several minutes, the commanding voice behind a bullhorn approached, many, including my grandfather and I, were instantly hushed. Gazing out, we saw Enrique, bullhorn in hand, leaning from the passenger window of a 1950's era hearse.

After a barely discernible expletive from my grandfather, the street cleared as on the sidewalk people gawked, presumably concerned about the identity of the finned vehicle's occupants.

Stopping in front of the garage, the driver explained in hurried English that he was Enrique's cousin, Alberto, and owned a nearby funeral home. He was only to happy to escort us back to our hotel since he was meeting someone at the bar there for lunch.

Scanning the hearse's back window, my grandfather then glanced at me and said "Gracias," as its rear door opened and we climbed inside. A short and silent ride later, I found myself looking into the eyes of a confused bellman as I quickly exited the hearse, grandfather in tow, amid a flurry of hasty goodbyes.

Sadly, I have no pictures from that day, nor have I ever ridden in an actual limousine. I do however, know what the quiet of a hearse feels like, and I'm in no hurry for the next such adventure.

The phrase, "You wait here, I bring limo..." reminds me of lines from films one cannot forget and I always recall the sweet and sweaty young man, with a mop of brown hair, his hands stained with grease, running through a crowded lane...

And Now, From The Slackest Poster On The Planet...

I have Baino to thank for the title of this posting. You're right, I have slacked considerably in the posting department...

Another blogger, Suzanne, of the Rose Cottage Studio, asked what I thought about turning fifty earlier this month as our birthdays are in the same week.

I really have not had a lot of time to think about it, but since none of us can turn back the clock, going forward as happily as one can manage seems the only solution. Have I done everything I set out to do by fifty? Not by half, but that only gives me more to look forward to. Numerous people have kindly noted that I neither look nor do I act my age. As someone wryly observed once upon a time, "You're only as young as you feel."

Judging by my joints, some days, I've a foot in the grave. Much of the time, however, I'm far too busy to worry about feeling out of sorts. While life in the last year or so has been a bit wearing, and is challenging on all levels, I've quite happily resumed a volunteer archival project on behalf of a specialised library that is part of my Alma Mater. Additionally, I hope to start an extended rehabilitation programme at a hospital gym that will strengthen my upper body and core (assuming the prescription for same can be located and faxed appropriately, a task that has taken two weeks to sort out thanks to our wonderful medical establishment). Further, a medication issue remains to be dealt with, as I've yet to get the lovely GP to the phone, despite two detailed messages...

When it isn't raining, I've been swimming. Searching the Internet and e-mailing those I know regarding job leads hasn't yielded fruit yet, but as I have no choice, efforts persist. Evenings often find me scratching my head over basic Hebrew, or plundering Netflix for British mysteries or comedies. Never a fan of American television fare, I'm dismayed at how slowly programming from the UK is released here, and how much isn't. There are several things I like that simply are not available here. Couple this with the fact that the UK and American DVD's as well as DVD players are incompatible because they are made in different regions, and I cannot play DVD's ordered from the UK, either.

Apart from that, and quite happily, the quadrupeds of this household have calmed considerably, ushering in long-sought domestic peace. How long this will last is any one's guess and I'm not taking bets at this point. In a month's time, I'll be in balmy southern California, where relations claim the weather should be cooler than the swamp I inhabit; I'm holding them to it and looking forward to the birthday celebration my niece is planning, meeting another blogger in person and seeing some longtime friends.

Email ThisBlogThis!Share to TwitterShare to FacebookShare to Pinterest
Labels: Life; 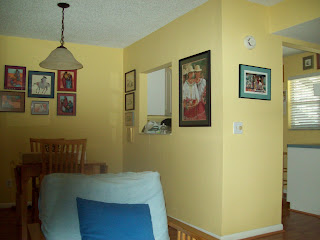 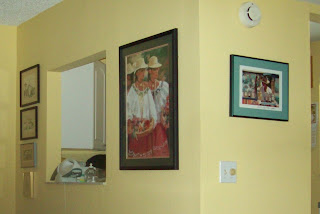 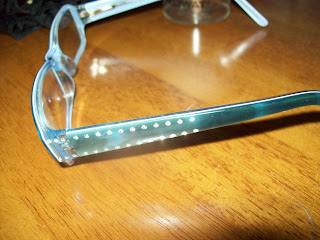 The elusive Godot arrived on July 20, and it suffices that things haven't been the same since. Remember how I crowed about the chair fitting into the vintage 70's doorframe for the loo? Unfortunately, the contractors will have to be called at some point. Meantime, furry felines have taken a liking to Godot, mostly for napping, as you can see here. Jacob loves me pushing him in my lap around the flat, too.
Since someone asked to see the new blue specs, and some of the recently re-hung art, these are included as well.

It's hard to believe I'm about to turn fifty!