Long time  readers may recall that I had an ADA shower built in my bathroom in 2013. Less than a handful of years elapsed before a problem became apparent. For safety reasons, I have a fold down bench attached to the shower wall on one side. One day while cleaning the shower, I noticed tiles around the installation point were beginning to buckle.

I wasted no time in calling the contractor who built the shower, leaving a detailed voicemail for him. When this got no response, I left several more, finally calling another general contractor with ADA experience. When the second guy heard the story, he brought over a form that folks can use as a first step in taking a contractor to court and said, "Show him this."

Not long afterward, a very apologetic guy showed up saying he was sorry, he did not get my messages. He looked in the shower, apologizing again and said that he had provided more blocking reinforcement than was actually called for and proceeded to fix everything, or so I thought until recently.

My tile around and below the bench is once more buckling, and because of COVID, I do not want anyone here. The shower has been cleaned as has the bench. I ordered a small shower stool which I can hopefully use on the opposite side of the shower with the hose attachment. I have no desire to go through this again nor deal with the original contractor or any contractor, for that matter. 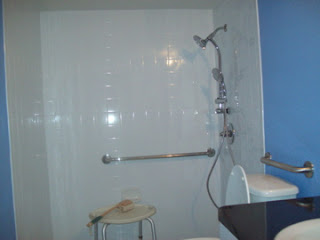 I am so very sorry to read this.
Showering safely is the start to my day - and I am endlessly grateful that my contractor did it right the first time.
And hope that your temporary resolution doesn't become your permanent default.
Huge hugs.

What a pain! I'm so glad you noticed before the bench pulled out of the wall.
By the way- your shower is sparkling! I wish mine looked like that.

Good for you for pursuing the original contractor. And I can see exactly why you're reluctant,with or without covid, to get involved with another. It's such a hassle.
I got one bathroom retrofitted with a hand held shower and stool and grab bars, for Handsome Partner, for which he was hugely thankful, so I'm familiar with the carry-on it takes.

So sorry that you had to go through all of that, but where there's a will, there's a way and you have figured out a way to get clean.

Your safety would have been at risk too. What a dreadful experience and it's so exhausting fighting for correction of shoddy workmanship.
I use a stool in my shower.

Oh brother. What a drag. I hope the new stool solves the problem. I second what Ms. Moon said -- your shower is so CLEAN!

Shameful, shoddy work from this contractor. Sorry you had to go through this! But I will say that your shower is amazingly clean! Can't say the same about mine :)

It's so awful dealing with shoddy contractors. I'm sorry you have to go through this. I would call them, though, for the record, so that you can get it repaired at no cost to you when it's safe to have people in our homes again.