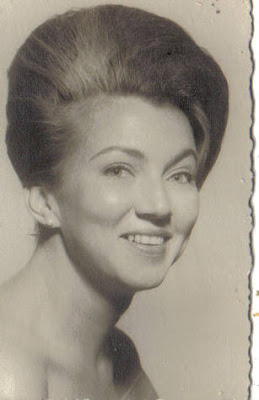 If she were still amongst the living, my mother would be seventy-two today. The photo here was taken in the mid-sixties, in her twenties. I would have been about seven or so.

A complicated woman, she was the first person I ever knew who could stop traffic, holding herself bolt upright amid cheers, catcalls and other exclamations. She could alternately curse like a sailor or hold her own with the most cultured, and she placed high value on manners.

Her eyes were a blue green that darkened with her mood, and when her eyebrow was raised without a smile beneath it, I learned to beware as a storm of anger could quickly ensue.

She endured much, including an early divorce, the death of a child and being a single, working parent before that became commonplace. My stepfather, whom she married at thirty, was the love of her life.

Widowed without warning at forty-two, I watched as her life imploded, never to be the same.

We were both like gathering storms, two forces of nature determined to have our own way. She loved but did not understand me, and I understood but sometimes failed, to appreciate her.

She was the first person in her family to attend university, an opportunity she was more than happy to extend to me, and one of which she was most proud.

Sarcastic, funny, irreverant and often surprising, she walked with her head up, rarely bowing to sorrow in public, a trait we both share.

Email ThisBlogThis!Share to TwitterShare to FacebookShare to Pinterest
Labels: Birthdays;

She sounds like a wonderful person and a very good role model - strong, determined, self-confident, refusing to be defeated by anything or anyone. Tragic that she died so early.

Of two thing I am certain:

1) Through you she lives on as a Vivaldi concerto.

2) She sleeps well and comfortable in the house of your ancestors and will live again.

A nice tribute to you mum. I think I can relate to your feeling especially in the sentence where you said about "gathering storms" paragraph...it just hit the nail on the head.

Such a young age to go.

That you're proud to be her daughter is evident, e. I have a theory that God gives us the parent or parents he most wants to use in our shaping, so we will become the people he wants us to be. They present us with challenges both good and ill but the sum of it all is a blessing. I like what Walking Man says: She lives on in you.

What a beautiful tribute!Sadly,died too young :(

What a wonderful, honest tribute to your mother -- obviously a very strong woman who met an early end. I'm sure you inherited many qualities from her, including your tendency not to take any crap from anyone!

Hi E. This is a wonderful post, and what a beautiful photo of your mother...

How sad about your mother. What a beautiful woman. Your testament is such that I'd like to have known her.

Her name was Sarah and she raised a beautiful daughter.
X David

OH e, this touches me too. My mother turns 80 today--she was quite old when she had me. Anyway, this is a fitting tribute to your mother withe te fact you obviously had some straining there as she became a shell of her former self. Isn't is sad how loss can leave people so permanently damaged? Your post has inspired me to write something similar for my mother, but being tha tI jsut wrote a long post...it may ahve to wiat a bit.